These ten large-scale color photographs, selected from the series Independencias, produced between 2009 and 2012, are based on panoramic photographs taken by García from culturally symbolic watchtowers that overlook the 27 capitals of the European Union - the Pompidou Centre in Paris, the Acropolis in Athens, St. Paul’s Cathedral in London.  Garcia then digitally paints the images, initially blanketing them in white, as if seen through a veil of snow, which gives all the cities a unified appearance.  This is followed by the selective red highlighting of repeating infrastructural details, such as smoke stacks in Paris, skylights in Berlin and London, chimneys in Vienna and Stockholm.  This combined intervention highlights the contradictions between individualism, national identity, and the larger membership in a political union of many nations and cultures.  The final prints act as a sort of x-ray of the in-dependencies within all the European capitals.

Two works in the show, Europa I and Europa II, present a montage of all the 27 European capitals, furthering the concept of the European city as a member of a common unified dynamic community, while at the same time a place for both personal independence and national identity. The construction of these complex works is featured in two videos by the artist.

Miguel Ángel García was born in Madrid in 1952 and lives and works in Cantabria, Spain. He is a photographer and visual artist with training in economics and agricultural design. García has exhibited widely in Europe and in South America, with numerous solo and group exhibitons. His photographs have been presented at Paris Photo, Madrid Photo, MiArt in Milan, Art Beijing, Art Basel,and Art Basel Miami Beach. He has been the recipient of a Syngenta Photography Award, the Arte Laguna Prize in Venice, the 1st Prize Photo Award in Santander City, and was a nominee for the Prix Pictet in Switzerland. Miguel Ángel García's works are in public and private collections in Spain, Switzerland, Portugal, France, India, Chile, El Salvador, the UK, and the US. 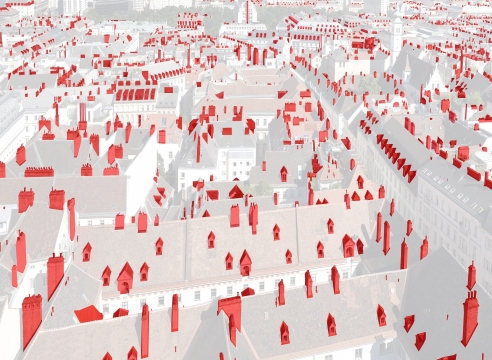